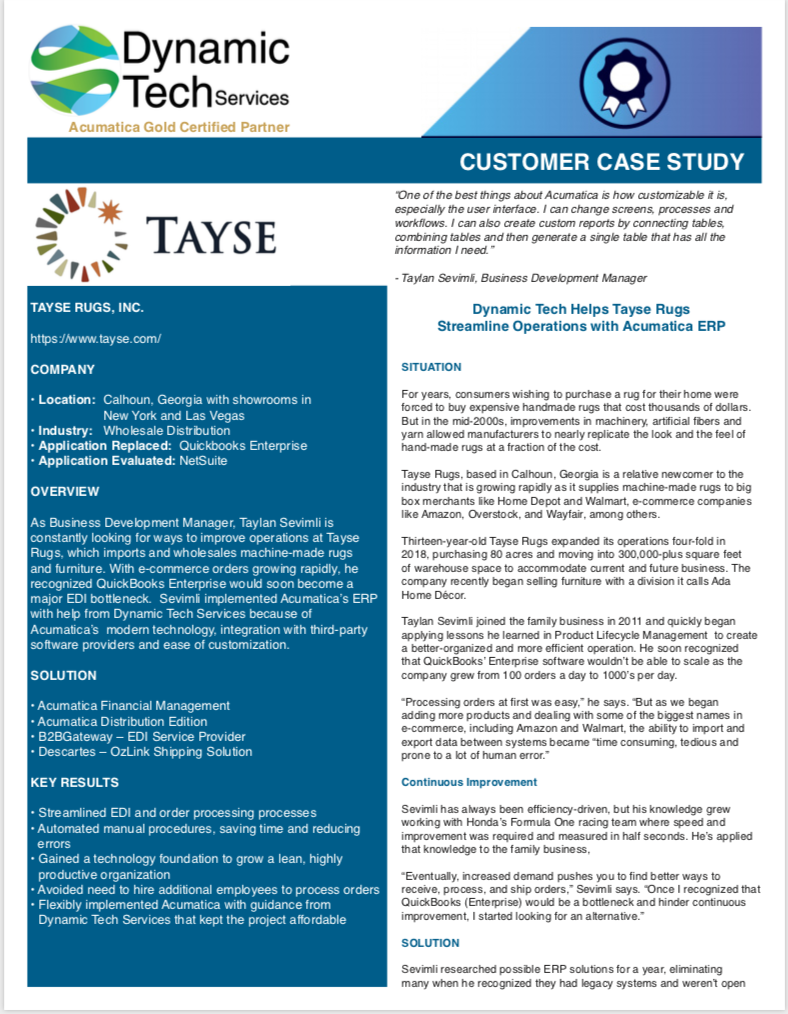 Tayse Rugs, based in Calhoun, Georgia is a relative newcomer to an industry that is growing rapidly as it supplies machine-made rugs to big box merchants like Home Depot and Walmart, and to e-commerce companies like Amazon, Overstock, and Wayfair, among others.

As Business Development Manager, Taylan Sevimli is constantly looking for ways to improve operations at Tayse Rugs. With e-commerce orders growing rapidly, he recognized QuickBooks Enterprise would soon become a major bottleneck. Sevimli implemented Acumatica’s ERP because of its modern technology, integration with third- party software and ease of customization.

“Processing orders at first was easy,” he says. “But as we began adding more products and dealing with some of the biggest names in e-commerce, including Amazon and Walmart, the ability to import and export data between systems became “time consuming, tedious and prone to human error.”

Sevimli researched possible solutions for a year, eliminating many when he recognized they had legacy systems and weren’t open to change. Initially Acumatica wasn’t on his list, but a developer friend mentioned the modern Cloud ERP platform designed for mid-sized customers. After Joel Gress at SWK Technologies demoed Acumatica and he researched the company further, Sevimli eliminated NetSuite from contention.

“Acumatica was easier to customize, easier to integrate, and allows you to see the backend and have access to the APIs,” he says. “Acumatica’s unlimited user licensing model rather than NetSuite’s per seat licensing was also a big reason.”

Tayse Rugs worked with the team at SWK Technologies to implement Acumatica, which went smoothly, Sevimli says. “About 90 percent of the implementation time was spent cleaning our data before we imported it to Acumatica,” he says. “After that, Acumatica has a logic to it and once you understand it, everything is a lot easier to handle.”

Now using Acumatica’s SaaS Cloud version allows Tayse Rugs employees to work from anywhere in the world. Executives visit Turkey often and can access company information via the cloud and through mobile devices.